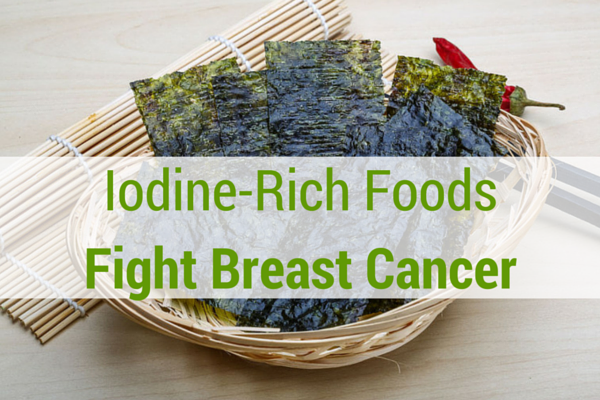 Women with iodine deficiencies are more likely to develop breast cancer. Eat more of these iodine-rich foods to reduce your risk.

The myth persists that a mammogram is the number one way to avoid breast cancer.

But the truth is that mammogram radiation can cause cancer… mammograms don’t prolong lives… and breast cancer screenings result in over-diagnosis and over-treatment.

And when it comes to diet, one of the best nutrients to help ward off breast cancer is iodine.

If you think about it at all, you probably associate iodine with your thyroid.  Too little of this element can lead to a painful swelling of the thyroid known as a goiter.

But iodine also plays a crucial role in women’s breast health.  In fact, a woman stores more iodine in her breasts than in her thyroid.[i]

It’s nature’s way of protecting babies. Iodine is critical for brain development in infants.  Storing iodine in the breasts insures a good supply of this essential brain mineral in breast milk.

But when a woman’s supply of iodine is low, it’s not just a nursing baby who’s at risk.  Women with iodine deficiencies are more likely to develop breast cancer.

What’s the link between low iodine and breast cancer?

In addition, low iodine increases the sensitivity of estrogen receptors in breast tissue.[iii]  The breast starts taking up even more estrogen.  That spikes breast cancer risk even more.[iv]

Dr. Bernard Eskin was a pioneer in iodine research.  He discovered that iodine-deficient breast tissue is more likely to have pre-cancerous changes and that iodine could reverse those changes.

And while iodine speeds the death of cancer cells, it leaves normal cells alone.

Epidemiological studies support the importance of iodine in breast health.

In Japan breast cancer rates are about 66% lower than in the U.S.[viii] At the same time, Japanese women consume between 3 and 13 milligrams per day of iodine.[ix]

But the U.S. Dietary Reference Intake (DRI) for iodine is only 150 micrograms per day (or 290 mcg if you’re pregnant or nursing).

By some estimates, Japanese women are getting about 25 times more iodine than the average American woman.[x]

But when Japanese women move to the U.S. and start eating a Western iodine-deficient diet, their breast cancer rates spike to American levels.[xi]

Since the 1920s Americans have gotten most of their iodine from iodized salt.  That’s thanks to a government push to add iodine to salt to prevent goiter.

But in recent decades anti-salt propaganda has led to women cutting salt – and therefore iodine – from their diets.  Since the 1970s rates of iodine deficiency have quadrupled.[xii]

Environmental toxins have also led to lower iodine levels. A group of chemicals known as halides binds to receptors inside your cells that are meant for iodine. They block the body’s ability to absorb and use the iodine.[xiii]

These halides include perchlorate, a chemical used for rocket fuel. Perchlorate now contaminates our groundwater, soil, and food supply.

Chlorine and fluoride in drinking water also block iodine.  So does bromine in flour, bread and baked goods.

If you’re deficient you can still boost your levels and ward off many health dangers – including breast cancer.

But your body can’t make iodine.  You have to get it from food or supplements.

Good food sources of iodine are:

But hands down the richest source of iodine comes from seaweed.  It has 10 times or more iodine than other foods.

Add dried seaweed to the pot when cooking soups, grains, or beans.

And Maine Coast makes organic kelp granules that you can add to your (un-iodized) salt shaker or just sprinkle on your food before serving.

[ii] David Brownstein, MD “Iodine: Why You Need It, Why You Can’t Live Without It” 2nd Edition,  Medical Alternatives Press, Michigan, 2006.

[vii] Garcia-Solis P, Alfaro Y, Anguiano B, et al. “Inhibition of N-methyl-N-nitrosourea-induced mammary carcinogenesis by molecular iodine (I2) but not by iodide (I-) treatment Evidence that I2 prevents cancer promotion.” Mol Cell Endocrinol. 2005;236(1-2):49-57.

Margie King is a graduate of the Institute for Integrative Nutrition®. A Wharton M.B.A. and corporate attorney for 20 years, she left the world of business to pursue her passion for all things nutritious. Margie is the author of Nourishing Menopause: The Whole Food Guide to Balancing Your Hormones Naturally. She is also a professional copywriter and natural health, beauty and nutrition writer. To contact Margie, visit www.IntegrativeMenopause.com.

Disclaimer: This article is not intended to provide medical advice, diagnosis or treatment. Views expressed here do not necessarily reflect those of GreenMedInfo or its staff.